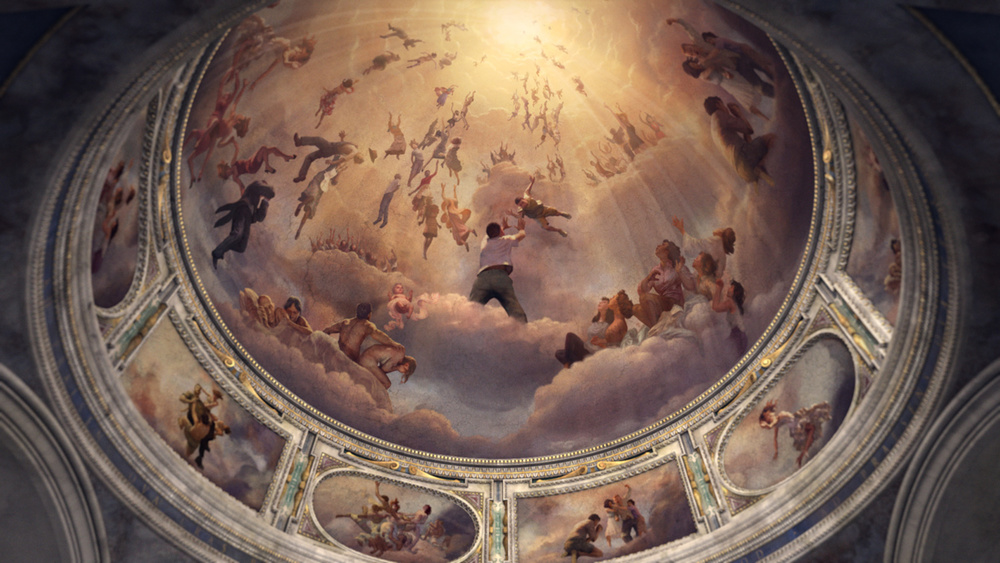 HOLLYWOOD, CA – The new HBO series “The Leftovers” asks many big questions about the meaning of life, the existence of God and the future of the human race. Likewise for the show’s main title sequence in which show creators Damon Lindelof (“Lost”) and writer Tom Perrotta turned to the award-winning creative studio yU+co. and Creative Director Garson Yu to create a concept that matched the ambitions of the show.

According to Lindelof, he knew he wanted a Renaissance-inspired credit sequence, but wasn’t sure how to use it. Enter yU+co who came in with the concept of using a traditional fresco painting style (most notably Michelangelo’s Sistine Chapel) to visually depict the forever-changed world imagined in “The Leftovers.”

“That suddenly made the sequence feel less pretentious, more irreverent and most importantly, original,” Lindelof says.

“The Leftovers” takes place in the aftermath of a rapture-like event where 2 percent of the world’s population suddenly vanished. The show centers not on the people who were taken, but on the ones left behind, specifically those living in the hamlet of Mapleton, New York.”

Hidden Meaning And Symbolism
“Frescos are like visual history lessons and for this title sequence I wanted to use the look of a classic fresco painting style, but create images that relate to the new dramatic event that is the basis for the show,” Yu says.

Set to Max Richter’s ominous, mournful orchestral score, the title sequence slowly reveals itself as a series of haunting images that juxtapose shots of people floating helplessly away toward the heavens with those left behind, depicted as grieving, angry and confused. One of the most affecting shots shows a newborn baby floating toward the heavens as his father reaches out for him with one hand while consoling his crying wife his other.

Adding to the pieces sense of mystery is yU+co’s elegant camera work that slowly pans the fresco in such a way that it is often unclear who is being taken away and who is left behind. The sequence ends on a heightened dramatic note as the camera pulls back to reveal the visuals are all part of an immense fresco on a domed church ceiling.

“The more you watch it, the more you discover the religious symbolisms and hidden meanings in it,” Yu notes. “The camera movement helps add to the tension because viewers are never quite sure who’s descending or ascending, and that’s the magic to me. I hope viewers will discover new meanings each time they watch it.”

3D Animation Meets Classic Painting
To create the authentic fresco look of the title sequence Yu turned to Rhode Island-based painter Jon Foster to compose the basis for the vignettes. Yu worked closely with Foster to insure that all of the subtle facial expressions Yu envisioned for each painting were represented. For Yu, it was crucial that those expressions reveal something deeper behind the characters.

From there, Foster’s images were digitally rendered in layers to give it a heightened sense of depth, and then composited onto a 3D animated dome that was designed by yU+co. in painstaking detail to look just like a classical Italian Renaissance cathedral dome.

“The combination of the images and the characters depicted, coupled with camera movement, helped create an immersive point-of-view that is also strikingly intimate,” Yu says. “Damon describes it as an ‘intimate epic’ and I think that is particularly apt.”

About yU+co
Since its inception, yU+co. has evolved from a design studio specializing in film title sequences to a global award-winning firm that offers design and production services for feature films, television, commercials, gaming and new media. Our story-driven approach to design inspires marketing solutions that engage consumers with brands and captivating narratives that entertain viewers across multiple digital platforms.

With offices in Hollywood, Hong Kong and Shanghai, yU+co. boasts an international talent roster that includes directors, designers, producers, animators, writers, programmers and visual effects artists. The diversity of our talent pool creates a wellspring of cross-cultural ideas and experiences that adds depth and originality to every project we work on.