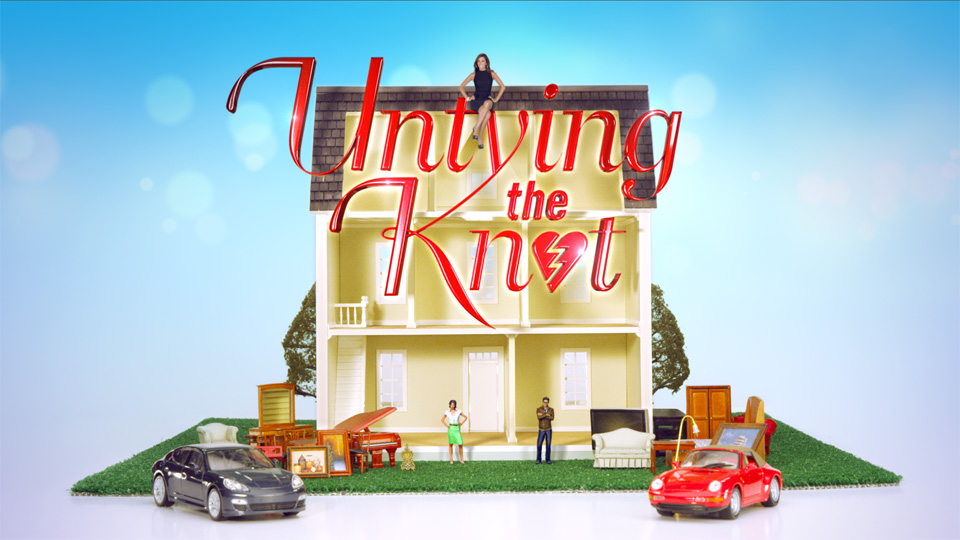 Divorce is always complicated, as the new Bravo reality series “Untying The Knot” can attest. Equally complex is the 15-second show open created by the award-winning motion design studio Monkeyhead, led by Creative Director Josh Sahley, who crafted an open that perfectly captures the characters that drive the show.

Airing Wednesday nights at 10pm on Bravo, “Untying The Knot” focuses on divorce attorney Vikki Ziegler, who couples turn to when they want to go from ‘I do’ to ‘I don’t.’

Each 30-minute episode features a different divorcing couple struggling to divide their assets that range from dazzling diamonds to the family pets. Ziegler’s expert appraisers Michael and Mark Millea evaluate the items in question and help determine a fair division.

“We felt strongly about finding a way to creatively tie the concept of the show into the open so that it wasn’t typical or generic,” Sahley says. “The tricky thing with this project is this show is about divorce and couples dividing up belongings, which can be a depressing subject. We needed to find a way to make it entertaining and easily digestible for everyone.”

Doll House Concept:
For Sahley and Monkeyhead they accomplished that with a concept that seamlessly blends live action and 3D animation, including the photo real divorced doll couple they built to cover all the notes perfectly.

The show open begins with a live action shot of Ziegler, as the camera pulls back we see her preached atop a doll house as large hands reach in and grab various objects from the house – a piano, furniture, art — and places them into his-and-hers piles on a simple astro-turf lawn. The open ends with a voiceover from Ziegler noting how “when love turns to hate, couples turn to me.”

“The doll house concept was key for this open. It makes it feel less serious, while the hands dividing the items up represent Vikki’s crew on the show who help her figure out the value of the assets,” Sahley notes. “Her sitting on top of the house conveys the idea that she is orchestrating the whole thing. We always put that extra level of conceptualization into our work. It may or may not always be noticed by viewers, but it usually feels right.”

Less Is More:
For Sahley, the project represents an overall trend in TV where it is critical to grab viewers’ attention quick and not give them a reason to reach for the remote. That’s especially true of show opens, which usually have to explain the show’s premise in an engaging way in 15 second or less.

“Show opens are more important than ever,” Sahley says. “Viewers have a shorter attention span, so shows today have just a few minutes at most to hook viewers. A well thought out open can make a difference and help sell the show in a short amount of time.”

Sahley adds,” Bravo and Engel Entertainment were amazing to work with. They were on board with our concept from the beginning and helped us push the open creatively and understood our vision. They let us do what we needed to do to make it work. As a creative company that’s all we can ask for. I think ultimately the end result does exactly what we wanted — cleverly convey what the show is about in the shortest amount of time possible. ”