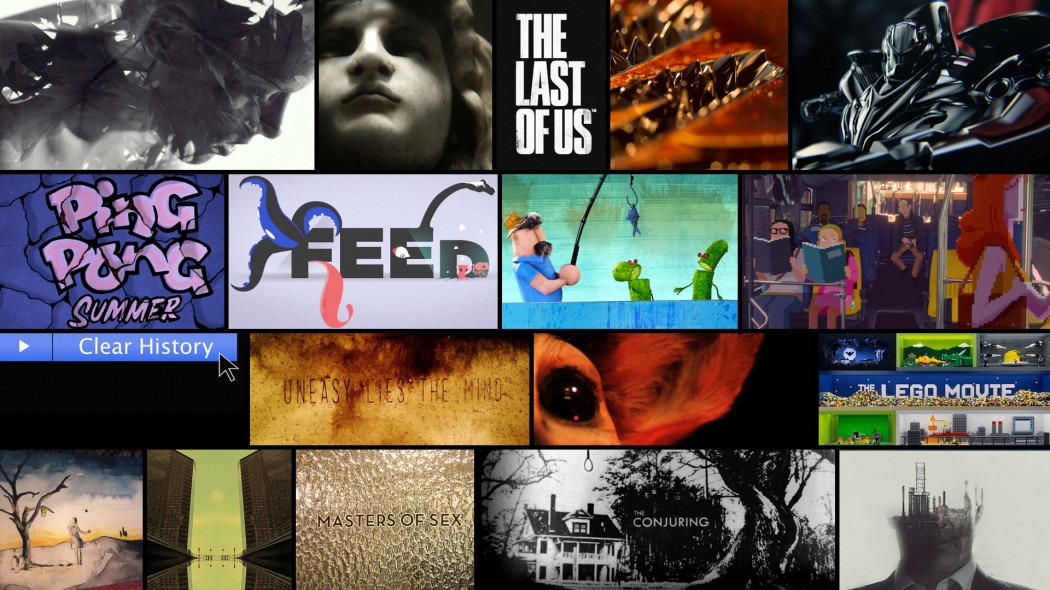 For the 5th year running, SXSW celebrates the collaboration between filmmakers and designers through their SXSW Film Design Awards.

This year 18 Finalists have been chosen for the Excellence in Title Design Awards and will be screened at SXSW on Sunday, March 8 at 4:30 pm in the Vimeo Theatre. Jury and Audience selected honors will also be awarded.

Without further ado…here are the finalists for the 2014 SXSW best titles of the year!

Analogue/Digital 2013
Designer: Joyce Ho
Studio: Breeder
Analogue/Digital is an Australian creative conference that highlights what’s happening in the design industry – bringing creatives together to meet, share, discuss and party. Using an aesthetic based upon double-exposures in motion, this sequence explores the theme of binary, juxtaposing the urban sprawl and nature, black and white, flight and fall, and unification and disintegration.

Black Sails
Designers: Karin Fong, Michelle Dougherty
Studio: Imaginary Forces
It’s 1715 and the golden age of piracy… a world where rebel pirates, collapsing shanty towns, whore houses, illegal treasure and the promise of the New World clash with the imperial forces of European civilization. Nothing less than a full-on art history mash-up of Baroque motifs, Gothic architecture and Rococo style could express this strange society, where outcasts and aristocrats alike vie for power. Using a sculptural language traditionally reserved for saints and kings, we depict a maverick society that is ultimately doomed. Beauty and death abound… as well as a skeleton or two…

Clear History
Director: Greg Mottola
Designer: Aaron Becker
Studio: Filmograph & Level 256 VFX
After learning that he lost billions to his old business partner and their electric car company, a disgraced former marketing executive lives in anonymity and seclusion on Martha’s Vineyard. Years later, when he finds out who is moving to town, he plots revenge against his former boss.

The Conjuring
Director: James Wan
Designer: Aaron Becker
Studio: Filmograph
The true life story of paranormal investigators Ed and Lorraine Warren working to help the Perron family, who are terrorized by a dark presence in their farmhouse.

The Glass Castle
Designers: Adrian Herr & Torben Stange
The title design is based on the book ‘The Glass Castle’ by American writer Jeannette Walls, in which she describes in a both fascinating and shocking way her own childhood and the growing-up in an unusual family. The title sequence portrays key moments of the book by bringing several objects of sentimental value to life that lie hidden in an old and used suitcase.

The Lego Movie
Directors: Phil Lord & Christopher Miller
Designer: Brian Mah
Studio: Alma Mater
An ordinary LEGO minifigure, mistakenly thought to be the extraordinary MasterBuilder, is recruited to join a quest to stop an evil LEGO tyrant from gluing the universe together.
Masters Of Sex
Various Directors
Designer: Leanne Dare
Studio: Elastic
Tells the story of Dr. William Masters (Michael Sheen) andVirginia Johnson (Lizzy Caplan), two pioneering researchers of human sexuality at Washington University in St. Louis, Missouri.
motion 2013
Designer: Alberto Scirocco
Studio: leftchannel
motion is one of North America’s leading innovative and uniquely intimate events – bringing together an ever expanding scope of the brightest and most creative minds for an annual celebration of who we are: creatives.
Pacific Rim
Director: Guillermo del Toro
Designer: Miguel Lee
Studio: Imaginary Forces
As the smoke clears from the epic battle between man and beast, we venture through an array of monsters, machines, and their monumental feats. IF worked closely with the film’s director Guillermo del Toro to present his colossal creations in stylistic fashion, combining macro-photography and a graphic novel aesthetic in stereoscopic 3D.

Semi-Permanent Portland 2013
Designer: Danny Yount
One of the largest events of its type, Semi-Permanent is a creative platform spreading art and design inspiration. Semi-Permanent explores the diverse and exciting design world bringing together exceptionally talented artists and designers to speak at the event.