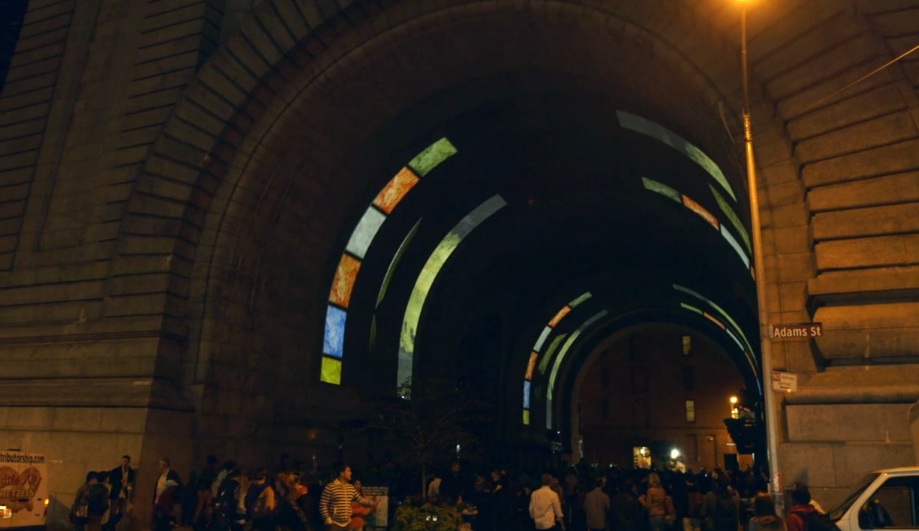 A transporting experience arrived in New York City under the direction of Clifford Ross, the landmark multi-media artist who has been captivating audiences for decades. His latest project, “Immersive Harmonium Video with Live Japanese Drum Group, Taikoza” took his vision deeper, enveloping viewers in a beautifully abstract world that was projected inside the century-old archway below the Manhattan Bridge. Putting the artist’s dream into action for the Dumbo Arts Festival required a fast-moving team — one that could produce 25 minutes of striking CGI in time for the show’s premier in September. One of the key resources that emerged was The Brigade, the cloud based studio providing scalable creative teams for visual design, animation and VFX artists that made the daunting project possible.

The Brigade was brought into the “Immersive Harmonium Video” project by Suite Spot, the bi-coastal video production company that collaborated with Ross on the installation.

“Clifford Ross is a highly established fine artist – we didn’t hesitate when the opportunity arose to work with him,” says Dave Dimeola, Founder of The Brigade. “He has a true sense of purpose, and he made sure that we understood conceptually, at a deep level, how this project should be experienced by the crowds in attendance.”

Inspired by his deep observation and love of nature, as well as his own vivid imagination, Ross’ ongoing Harmonium Video series deconstructs nature into wildly abstract color and movement. The creation of the latest installment, “Immersive Harmonium Video,” called for the seamless integration of 15 visually rich sequences, where CGI would be employed to put scores of 3D images from Clifford Ross’ extensive library into motion.

Once onboard, Suite Spot had just three weeks until the event to get the 25-minute animation fully rendered – a deadline that might be considered tight just for a 30-second advertisement. Needing an animation studio that could provide extreme levels of scalability and flexibility, Suite Spot Founder Eli Heitin turned to The Brigade.

Rather than maintain a large in-house staff, The Brigade has a much more agile business mode that’sl designed to custom fit its capabilities for each specific project. The New York office serves as the central hub for DiMeola and his colleagues, who oversee a strictly vetted creative team of freelancers that can be assembled at moment’s notice. From there, The Brigade applies a proprietary, cloud-based system that allows them to manage their global pool of talent and resources to maximum efficiency.

“The Brigade is uniquely capable of pulling together all the specialists needed for a project like this,” says DiMeola. “Whereas other companies rely mostly on artists they have only onsite, we were able to create the optimal team of specialists regardless of their physical location. But that doesn’t mean getting whoever’s available: We tailor the team, the personalities, styles and skill sets to match every project.”

As Gavin Guerra, Technical Director for The Brigade, and DiMeola hand-picked their team, they also made a series of careful calculations upfront, assessing exactly what was possible in the given time frame. “That’s a big part of the job,” DiMeola says. “We have to determine render requirements, file transferring and overall workflow before we undertake the project. That makes the production pipeline work seamlessly once we’re underway.”

With a schedule established, Guerra served as the liaison between the artist and the international network of creatives that The Brigade enlisted – all of them experienced Cinema 4D animators with particle expertise — for “Immersive Harmonium Video.” Guerra would traffic Ross’ original elements for each sequence to The Brigade team, who then transformed the 3D images into the mesmerizing animations that were then edited together, and finally projected onto the Manhattan Bridge’s archway.

As versions of each sequence were completed, Brigade would send them on to Ross for feedback, revisions, fine-tuning and final approval. Ever the demanding artist, Ross made changes to the work virtually until show-time.

“That level of effort is what’s needed to help artists realize exactly what they’re imagining,” Dimeola observes. “The Brigade is particularly well equipped to provide that support, because we’re creative people too. We appreciate that an artist of Clifford Ross’ stature chooses to collaborate with us.”

For Suite Spot, The Brigade proved to be the exact solution they were seeking. The Brigade ultimately output an estimated 201,540 frames of animation – representing 840 hours of rendering at 15 seconds/frame — completed in just three weeks. To make tough deadlines like that, The Brigade takes advantage of cloud-based rendering services, and have developed their own workflow inconjunction with services like Amazon’s EC2 or Render Core.

“The Brigade allowed us to be as big as we needed to be, and put all of our budget towards the screen,” Heitin says. “We appreciated the way that The Brigade was able to allocate our resources efficiently and have a team working almost nonstop to produce this work. They did a lot in a short amount of time, all while staying true to the aesthetic.”

For The Brigade, who routinely see the fruits of their labors on TV, movie screens and online, the completion of “Immersive Harmonium Video” led to a particularly memorable premiere. Experienced live and in person with an enthusiastic audience, Clifford Ross’ colorful visuals merged dramatically with the live music of the renowned Japanese drum group Taikoza — all in one of Brooklyn’s most inspiring outdoor settings.

“When ‘Immersive Harmonium Video’ was actually projected onto the bricks of the Manhattan Bridge, it was an awesome experience for the crowd in attendance,” DiMeola adds. “It’s exhilarating to choreograph a complex project, executing it precisely despite the challenges. That’s why we do this.”

The Brigade curates world-class creative teams from across the globe for visual design, animation & VFX, mobile and beyond. From their New York City hub, The Brigade uses proprietary cloud-based systems to manage people and projects worldwide, scaling quickly up or down as needed. The company’s clients include Puma, Black Rock, Reebok, AMC, Movado, Panasonic, and many more.