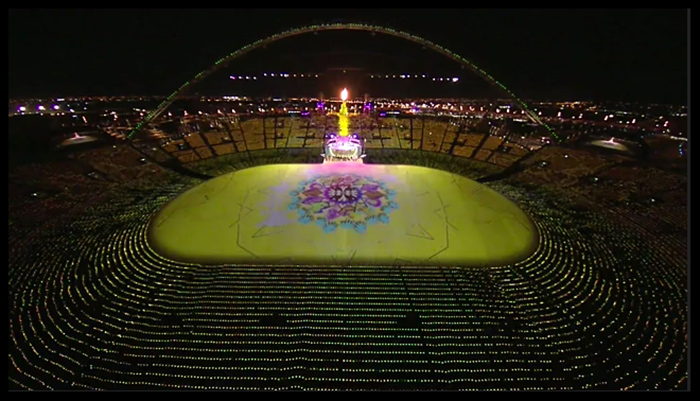 Australian digital design and production specialists Digital Pulse has received global accolades for its contribution to the opening ceremony of the 12th Arab Games in Doha in December. Digital Pulse produced the spectacular content to complement the emotionally charged visual narrative created by David Atkins Enterprises.

Journey to Light was a visual animation experience projected over the largest ever stadium projection surface. It celebrated Arabic culture by delivering a message of unification, peace and freedom for the 21 participating Arab nations on the region’s sporting night of nights.

“We are so proud to have been involved in creating the visual experience for this event, which is the pinnacle of the Arabic sporting calendar. It was inspiring to share the story of the games with all participants and the world,” Digital Pulse managing director Brett Heil said.

“The light show unified the audience, symbolising the importance of respecting the diversity of neighbouring cultures and traditions and maintaining unity at a time when the foundation of Arabic history is being challenged like never before,” Mr Heil said.

The project follows Digital Pulse’s success in developing the screen animation for the critically acclaimed Australian stage production of Hairspray. The team again worked with David Atkins Enterprises to create fully interactive content for the high quality mobile LED screens that allowed the cast to interact with visual elements.

The Arab Games opening ceremony at Khalifa Stadium involved a similarly complex process that involved Digital Pulse creating content compatible for two systems – the projection and the LED, which were run by different companies and servers.

The story not only illuminated the central performance arena but also the entire circumference of the stadium thanks to a contiguous LED screen installed behind each seat. In total, 86 projectors video-mapped a world record 126,000 cubic metres of floor and seating area that was utilised as a backdrop.

“It was a thrill to be involved in a world first using the stadium as an LED screen with an LED pixel box behind every seat to make up about 40,000 pixels. The opening ceremony lasted 40 minutes during which each audience member played a role thanks to the all-encompassing effects of lighting,” he said.

The end result was a projection of an Arabic tale celebrating the desert as a land of prophecy and light, which was brought to life for the 40,000-strong audience and over 6000 athletes by a cast of over 3250 dancers, musicians, athletes, horsemen and falconers.

Watch highlights of the 2011 Arab Games on motion.tv.