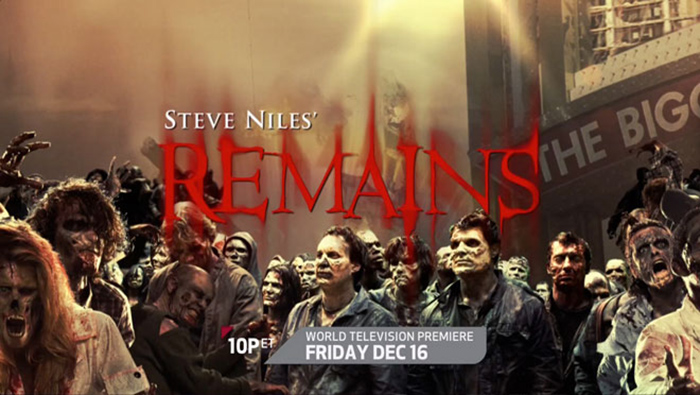 Broadcast design & animation studio motion504 recently teamed with NBC-owned network, Chiller, to create a comic-book-influenced promo for the upcoming movie, “Remains,” based on the graphic novel of the same name by Steven Niles. The movie premieres on Chiller on December 16th.

Niles’ “Remains,” Chiller’s first original film, journeys to Reno, Nevada where a horrific blast has turned the locals into the ravenous undead. A group of remaining humans takes refuge in a vacant casino and fights a losing battle against the undead, who grow steadily stronger, smarter and more aggressive by the minute.

“We came to motion504 with a very rough edit and asked them to design a visual treatment for the trailer,” says Brian Everett, Chiller Design Director. “The goal was to connect to the story’s (graphic novel) origins, while at the same time capturing all the visceral action the film has to offer. On a rather tight timeline, they created an animation toolkit that’s slick, textural, and really helps elevate the footage. Being that ‘Remains’ is Chiller’s first original movie, it’s been great to collaborate with the team at motion504 and develop a piece of communication that’s both scary and stunning.”

To stay true to the movie interpretation, motion504 Creative Directors Scott Wenner and Amy Schmitt hand-sketched detailed frames from the film itself. As they were illustrating, motion504President / Creative Director Andrew Reynolds began creating animatics and tests, building the sequence simultaneously to accommodate the short timeline. After refining the edit, the three then animated the scenes, giving life to the piece by adding movement and distortions to the environments and zombie characters.

With the short turnaround time, motion504’s hands-on approach worked well, with Reynolds posing as a zombie for a number of the shots, and Schmitt and Wenner using their own hands for reference to create elements.

Dozens of pencil sketches were scanned and colored in Photoshop. Animation was executed in After Effects, using a wide variety of techniques to give life to each scene.