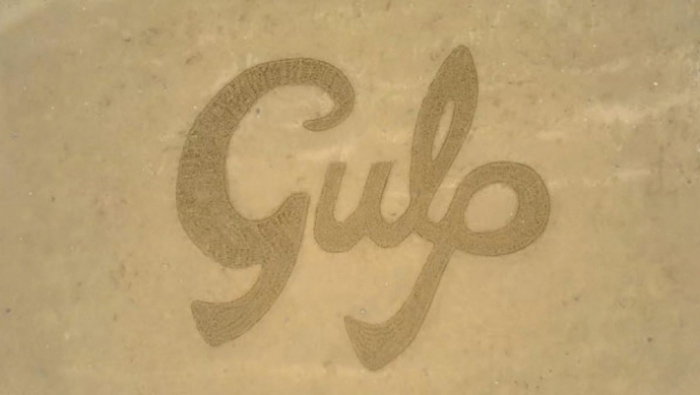 Life is a Beach for Aardman’s Record Setting Film ‘Gulp’

Aardman Animations, the company behind Wallace and Gromit, have set a world record by filming the world’s largest stop-motion animation at Carmarthenshire’s Pendine Sands in South Wales.

Directed by Will Studd and Ed Patterson (aka Sumo Science) the film explores the life of a little fishing boat when the tide goes out. As the sea ebbs away oilskins and nets come to life manifesting a lone fisherman out to find the catch of the day.

When he sets off across the sea he encounters an ocean vista of waves, gulls, clouds and fish all created using giant sand animation, carved in the beach itself. As the fisherman hauls in his sandy catch he is swallowed by a huge sea monster. Trapped inside the beast’s cavernous stomach, he accidentally sets off a chain reaction and is catapulted back to the surface, too late to save his catch from escaping back into the ocean.

Water, birds, clouds, and fish were created as animation drawn in the sand in a 140 feet wide by 78 feet high frame. A team of sand artists and 30 art student volunteers created a series of gigantic sand drawings that had to be smoothed over and re-drawn every four minutes to stay on the tight schedule dictated by the spring tide.

The huge set was made up of familiar nautical objects, such as seaweed, ropes and nets. Aardman’s expert prop makers built a replica life-sized fishing boat that was light enough to carry around on set. Both a half boat and full boat were constructed for the different perspectives.

The film was shot by director of photography Toby Howell entirely on three Nokia N8 cell phones with Zeiss optics and 12-megapixel capabilities, positioned 118 feet overhead. Video signals were sent out from the phones and into a signal booster box, which then routed the signal over a 90-meter video cable for monitoring by the camera assistant, who triggered each camera using Apple wireless keyboards paired with the phones via Bluetooth. High-quality JPEGs were downloaded via a USB cable connected to a USB extender that sent the image out via Ethernet to the truck for review. Confused?

Watch Howell’s video here (but beware of the wind noise that obscures his explanation of the camera rig).