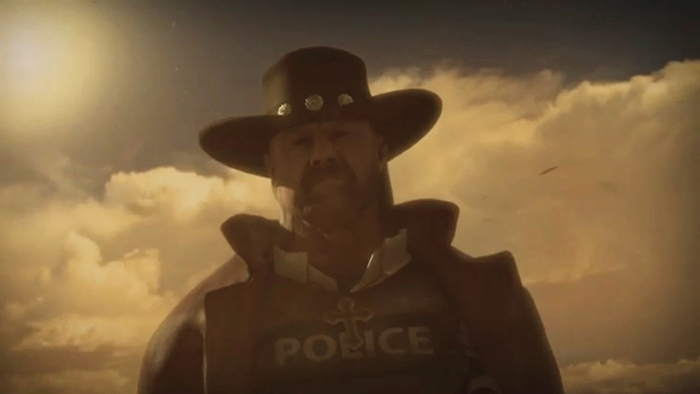 HOLLYWOOD, CA – Looking to imbue the just-released trailer for Call of Juarez: The Cartel – the next chapter in their popular western themed shooter franchise (due out this summer) – with a modern look and a powerful ‘Hollywood blockbuster’ feel, game developer Ubisoft again tapped the multi-disciplined creative design/visual effects studio yU+co to execute the project’s complex motion capture, design, 3D animation and visual effects.  The trailer is currently airing only online and can be seen at the official Call of Juarez website, as well as select others.

yU+co responded with a :90 creative and technical tour d’ force that perfectly melds the game’s old-west roots into a new contemporary storyline centering on a band of hard-nosed DEA agents matching wits, fists and guns with a drug dealing Mexican cartel.

“Ubisoft came to us with the over-arching concept of dust as both a unifying visual device throughout the trailer, taking viewers from scene-to-scene, but also a symbolic one that refers to the drug trafficking that fuels the Call of Juarez: The Cartel storyline,” Garson Yu, yU+co’s Creative Director, says. ”It was a great idea that inspired our creative execution, and challenged us to build on it and come up with more and more clever, yet subtle, visual metaphors for dust.”

New Motion Capture Techniques
For Sharon Ortiz, Ubisoft’s Senior Creative Writer, developing a concept that would introduce it to gaming audiences would be tricky.

“The Call of Juarez franchise has traditionally been set in the wild west and this new iteration would be the brand’s first set in modern times,” Ortiz said. ”Because of that we needed a concept that introduced the game’s storyline and characters in a unique way that befitted the iconic western – and naturally we wanted that epic Hollywood blockbuster feel. Ubisoft has worked with yU+co quite a few times over the past several years. We knew they would be an ideal partner on Call of Juarez: The Cartel. Collectively they have a great creative eye and an unflagging commitment to detail that would ensure a visually-stunning, high quality trailer.”

To achieve the bold look Ubisoft demanded, and make the extremely ambitious six-week production schedule, yU+co employed a new state-of-the-art system of motion facial capture called MotionScan. Created by the Sydney, Australia-based company Depth Analysis, MotionScan enables a high-res 3D recreation of a person’s face – not just capturing bits and pieces of facial animation, but their entire head, right down to the hairstyle and texture.

After extensive casting, yU+co shot the actors in two separate set-ups. In the first, the cast acted the scenes from the neck up only using the MotionScan technology. In a separate take yU+co captured the body movements and physical action using a more traditional motion capture set up. From there, both sets of data were composited using Adobe After Effects, and comped into the complex 3D animation they created using Maya. A radical way of combining technologies to be sure, but necessary to create the photo-real look the client wanted in a short time frame.

“Our biggest concern was whether we could achieve the visual effects, at a high level of execution, on time,” Brian Tippie, Ubisoft’s Art Director adds. “yU+co was an integral part in coming up with a solution that would enable us to deliver this project on time. Their recommendation to use facial scanning became the only way to execute this project and have it be more than just another game trailer. They brought the characters to life.”

Memorable Sequence
Perhaps the most memorable sequence in the trailer features a long, continuous take set during a high-speed car chase on the Los Angeles freeway. The camera, in Tarantino-esque slow motion, follows the path of bullet as it’s fired from the shotgun of the main DEA agent, through the rear windshield of the cartel’s SUV and into the back of the driver, resulting in a spectacular crash and ball of fire, containing both real and 3D elements.

“To make this project come together meant partnering with Ubisoft in a way you don’t often see between client and creative studio,” Carol Wong, yU+co Executive Producer, says. ”They showed a lot of trust in us, especially given the new technology we were using. Together, we were extremely focused on making this trailer as powerful and effective as we could. You can see that in the final piece, which creatively stands head and shoulders above most videogame trailers out there.”