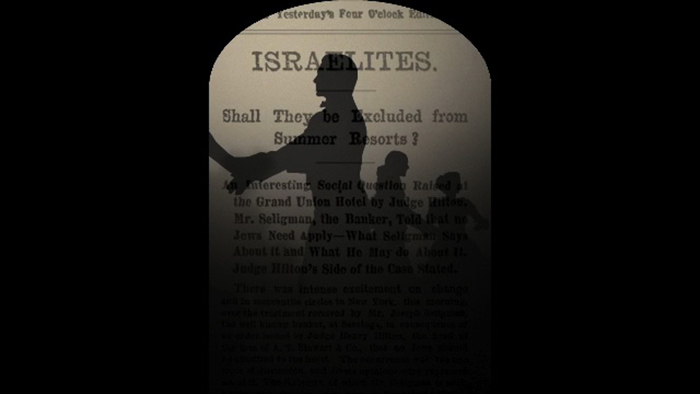 For de la Gorce, who led the One Fine Day creative team for this pro-bono project, the intricately designed 2-plus-minute sequence entitled “Purim” that is part of the exhibit looking at the American Jewish experience around the late 1800s, was by far the most creatively challenging.

“The video illustrates a moment in time in the history of American Jews when they had finally assimilated and prospered in America and could afford extravagant parties in luxurious settings, only to see it change because of a resurgence of anti-Semitism,” de La Gorce says. “We depicted that shift visually by contrasting these silhouetted ballroom dancing couples with backgrounds made of racially-charged newspaper articles and illustrations published during those years.”

Shot by Grubin on a soundstage with professionally choreographed ballroom dancers, “Purim” is seen solely from the POV of someone looking into a ballroom from a distance. Subtle lighting adds a sense of mystery, with the dancers appearing only as non-descript silhouettes moving gracefully to an original score by composer Joseph Lanner.

Designed to convey both a sense of grandeur of the time and ominous changes on the horizon, Grubin’s live action footage – coupled with footage of actual artifacts from the museum such as fine crystal candelabras and chandeliers, and print content such as advertisements, illustrations and newspaper articles – was composited by de la Gorce and the One Fine Day team using Adobe After Effects and edited using Final Cut Pro.

In addition to “Purim,” One Fine Day also contributed creatively to the more editorially focused video called “Revolution” – an exhibit that focuses on the American Revolution.

“The fascinating part of this project for me was working with scholars rather then brand managers for a change, whose most important concern was historic accuracy,” de La Gorce says. “It was fascinating to be a part of their process. Their level of passion was both and blessing and a curse because if also meant a lot of last minute changes, but we’re proud of the work and the opportunity to work on such an important project.”